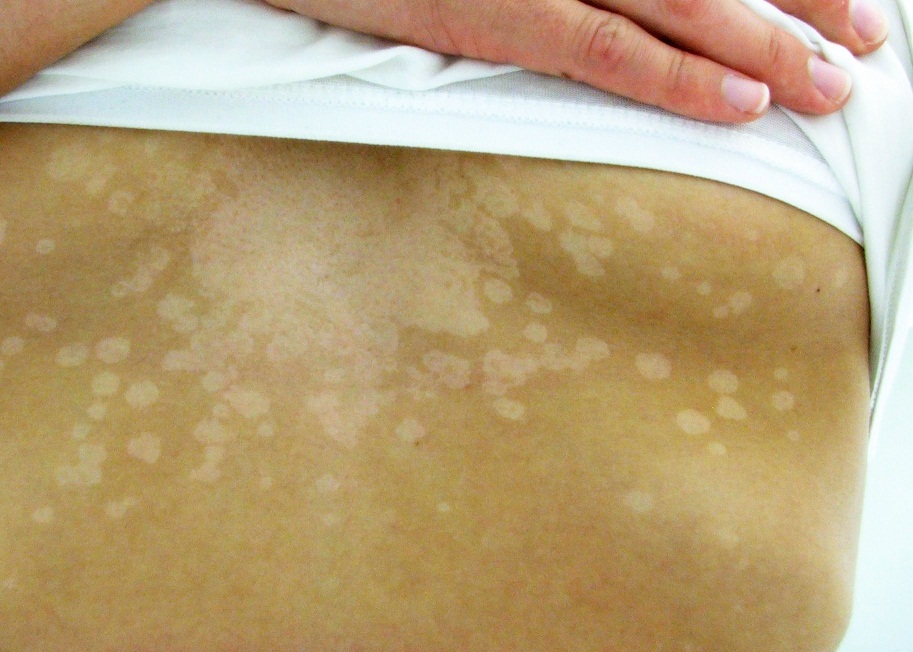 Tinea versicolor or  Pityriasis versicolor is a fungal infection of skin caused by the yeast Malassezia species (commonly called pityrosporum). This yeast is normally present on everyone’s skin as part of normal skin flora. Then why does it cause infection in some cases only? That is because it is present on everyone’s skin in nonpathogenic (harmless) form and gets flared up when the host’s immunity is low along with contributing congenial factors for the yeast to survive such as excessive sweating, high temperature and humidity.1

What is Tinea versicolor?

Tinea versicolor is a symptomless superficial skin disorder in which small round hypopigmented (white) patches appear on the skin. In very few cases mild itching of the skin may be present. The patches are present so close together that they merge into one another as they grow in size. They have a scaly appearance. They are most commonly seen in the neck area, shoulders, upper back, upper arms, and even the face. The involvement of face is more common in children.

Tinea versicolor is caused by Malassezia furfur yeast (a type of fungus). It is seen more during warm and humid climate.3 Malassezia is a dimorphic fungus that can exist both in yeast and hyphae form.  The fungus normally thrives on human skin in the yeast form without causing any symptoms. When host’s immunity goes low, the yeast starts multiplying and takes filamentous hyphe form (pathogenic or harmful form) causing scaly patches on the skin called Tinea versicolor. The patches may be hypo or hyperpigmented which later coalesce or join together and form clusters usually with sharp margins. The color of patches may vary from white or pink or brown (hence the name ‘versicolor’).4

How to diagnose Tinea versicolor?

The appearance and clinical features are enough to make the diagnosis of T. versicolor. The following tests may be performed in few cases to confirm the diagnosis.

Microscopic examination shows short thick strands called hyphae along with clumps of round spores giving it a spaghetti and meat ball appearance and that is typical of Tinea versicolor.

How to differentiate between Pityriasis alba and Tinea versicolor?

Both Pityriasis alba and Tinea versicolor are superficial, asymptomatic (without symptoms) and recurring conditions causing hypopigmented (white) patches on skin. However where former is a self limiting condition, latter is a fungal infection of skin that needs treatment.

Unlike P. Alba which is more common in childhood, T. Versicolor is commonly seen in teens with maximum cases seen in early 20s.

How to cure Tinea versicolor?

T. versicolor is a benign fungal skin infection which in rare cases may disappear on its own but in majority of cases anti-fungal treatment is required. However recurrence rate is high even after effective antifungal therapy.5 Remember that the disease does not spread by human contact as the fungus (malassezia) is present on human body surface in an unharmful state (as a commensal). Also, the disease does not lead to any pigmentary disorders in the long run. Topical antifungals i.e. antifungal creams, lotions and shampoos are the first line of treatment for T. Versicolor. Systemic antifungals (antifungals for internal use) are given only in severe cases.