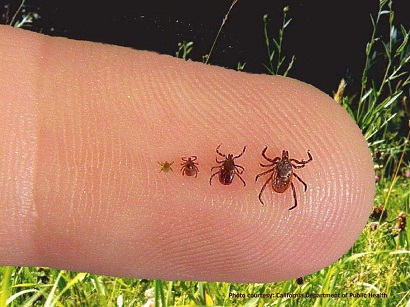 Lyme disease is a bacterial infection spread among humans by the bite of infected deer ticks (belonging to the family Ixodidae). The tick gets infected by feeding on deer or mice already infected with the bacteria Borrelia burgdorferi. So, not each tick bite ends up in Lyme disease. One can get Lyme disease only if the tick had bitten an infected animal previously. It usually affects multiple organs of our body like skin, muscles, joints, nervous system and heart.

According to CDC (Centers for Disease Control and Prevention), Lyme disease is the most prevalent of the tick transmitted infections in U.S. In an intensive analysis of data reported to the National Notifiable Diseases Surveillance System for sixteen vectorborne diseases, Lyme disease was sixth most commonly reported notifiable infectious disease credited with 82% of the tick-borne disease reports throughout 2004-20161. CDC research indicates over 300,000 cases are diagnosed and treated each year in U.S with total cost of Lyme disease testing at about $492 million2.

Prevalence of Lyme disease is seen more in central, eastern, and northern Europe and in parts of Asia, U.S. and Canada.

How are humans infected with Lyme disease?

Humans are infected with Lyme disease from a tick bite on the skin. Infection occurs only if the tick carrying bacteria (Borrelia burgdorferi) remains attached to the host skin for at least 24 hours. More is the time of skin exposure to tick, more the risk of infection. Risk will increase to 100% if the tick remains on the skin for three days. Therefore the most effective prevention of Lyme disease is early detection and removal of the ticks from the skin. How to remove tick from the skin? Simply hold it with tweezers and pull them away from skin. Do that gently so any a part of the tick isn’t left within the skin.

Ticks are found throughout the year however cases of Lyme disease are frequently seen during spring and summer season when the nymph (nascent) ticks are most active and almost undetectable due to their smaller size (poppy seed size).

Transmission of Lyme disease cannot ensue through water, food, air or through bite of any other insects like mosquito or lice.

What are the symptoms of Lyme disease?

Why is prompt treatment important in Lyme disease?

It has been observed that if antibiotic therapy is given at the stage of Erythema Migrans, the treatment is curative in 99% of the cases3. If the disease is left untreated at this stage and the treatment is delayed, then it may progress to the disseminated stage and affect other organs of the body such as muscles & joints, central nervous system and heart. This development may take from 6 months to a year.

The disseminated stage of Lyme disease include the following symptoms

Even though Lyme disease is responsive to antibiotic treatment, inflammatory reactions persist in some individuals after the treatment leading to chronic symptoms4.

Prompt diagnosis and early treatment could scale back the chance of additional symptom development and progression to the disseminated stage.

How is the diagnosis of Lyme disease confirmed?

The typical skin rash of Lyme disease (Erythema Migrans) appears only in two-third of the cases and takes 3-30 days to present after tick bite. The rash gets larger in size (approximately 5 cm in diameter) in subsequent days with central clearing giving it a Bull’s eye on dartboard appearance. This skin rash appears much before antibodies appear in blood therefore patients presenting with the skin rash may have negative blood test results. So, diagnosis of Lyme disease can be confirmed if the characteristic erythema migrans is present and no need to wait for the blood tests. Further, the rash is a more reliable sign out of the two.

How can Lyme disease be prevented?

Lyme disease can be prevented by following simple precautions like:

How can Lyme disease be treated?

Since Lyme disease does not always appear in its typical presentation, the diagnosis is delayed. In absence of prompt treatment, chronic disease sets in causing serious complications such as cognitive impairment. Bacteria have become refractory to treatment due to excessive use of antibiotics in various stages of Lyme disease. In the wake of ever increasing antibiotic resistance, there is a strong need of alternative therapy which may be safe and effective.